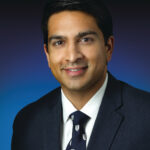 With Respect to Clinical Excellence, Age is Only a Number