Lessons From “Diary of a Med Student”

Working in healthcare, we interact with people who can be offensive. A med student reflects on how best to respond to patients who are demeaning. 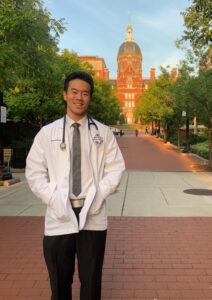 During their core clerkships, two medical students at the University of California, Irvine, discovered that sharing and processing their stories with their peers—who understood the weight of their experiences—was deeply therapeutic. Daniel Azzam and Ajay Nair Sharma, like most medical students, had experienced the emotional highs and lows of their preclinical and then clinical training, which was now being buffeted by the COVID-19 pandemic. These distinctive thoughts and feelings—the sorrow of losing a patient, the joy of performing a procedure for the first time, the humor of non-catastrophic clinical miscommunications—were known so well by those inhabiting the world of medicine and could inspire much-needed inner reflection in the safety of each other’s company. Daniel and Ajay collected over one hundred short stories from medical students across the United States and worked with a team of editors and designers to publish these tales in their book “Diary of a Med Student.”

I contributed two of my own short stories to the book, one about struggling to maintain the right priorities as a student and the other about a challenging interaction I had with a suffering patient. I also had the privilege of being an editor, which involved reading and offering feedback on the dozens of fascinating submissions we received from thoughtful, humble, and creative medical students. I was deeply comforted in reading these stories from my future colleagues and I’m proud to know that these future physicians don’t shy away from confronting some of the most emotionally demanding moments of their lives.

In addition to finding kindred spirits within the pages of this book, I was delighted to discover pearls of wisdom about patient-centered care. Many of these, in fact, emerged out of mistakes the author had made or new emotions that they found difficult to manage. One story in particular stood out to me because it addresses an issue that is becoming more salient in our increasingly polarized society—caring for people whom we find offensive or distasteful.

The story, “No Matter What,” described the internal tension a medical student faced the morning after the 2016 presidential election, when she had to care for an elderly patient who was wearing a politically charged shirt with a misogynistic slur. “As an under-represented minority student in medicine, I felt unwelcomed and unsafe. I felt anger at what I considered to be a smug and offensive display on the patient’s shirt . . . [with] two bulky, tattooed white men in a room with a woman of color attending physician and two Latinx medical students,” she wrote.

Although I must not analogize my experience to hers, I was reminded of the anger and cognitive dissonance I felt many years ago as a hospital volunteer caring for two teenagers who had been taken to the emergency department by police. They were likely intoxicated and had sexually violated another individual just minutes before arriving to the hospital. I felt averse to helping someone whose conduct I found so morally reprehensible. And yet, like all healthcare professionals, I was responsible for doing my part to give the best care I could to all patients regardless of how I felt about them.

The medical student author insightfully retells how “multiple power dynamics were simultaneously at play in the room.” On the one hand, her patient exerted power over her by his overt display of racism and misogynism, and on the other, she and her attending physician could influence how he would be treated. “I tried to find compassion in my heart . . . We treat patients, no matter what . . . We heal, no matter what,” she wrote.

There’s a radical turning point in the story when the patient breaks down in tears and the medical student discovers that he had metastatic cancer. “My feelings of frustration and anger soon gave way to feelings of shame. I was so quick to judge the man before me. Initially, I failed to see him with the empathy and compassion of a caring clinician. I reflected on how my biases, explicit or implicit, could seriously impact the care I provide in future years,” she reflected.

I was amazed by this posture of humility and self-awareness. Although she could continue to embrace her instinct of self-preservation in the face of her “enemy,” she allowed his suffering to transform her view of him. Instead of clinging onto repulsion, she saw her feeling of shame as an impetus for self-examination, which in turn prompted her to consider her biases against others.

This student’s response was a courageous act of introspection and compassion in response to an unpleasant patient encounter. I would have understood her decision to maintain her initial views of the patient. But she allowed herself to see his humanity and considered how it could guide her in caring empathetically for her future patients, irrespective of their personal views toward her.

Her short story offers clinicians and aspiring clinicians like me a pearl of clinical excellence. It made me reflect on how I would have responded to a similar situation and how I intend to do so now after reading her story. I’m grateful for the vulnerability of this student and hopeful for the future she will help shape in medicine. As colleagues someday, I believe we will be an increasingly caring community because of it.

What’s a funny or creative gift you’re giving for the pandemic holidays?

In honor of Memorial Day, how do you remember and honor a person that you’ve lost?

What’s a great gift you’ll be giving or hope to receive this holiday season?